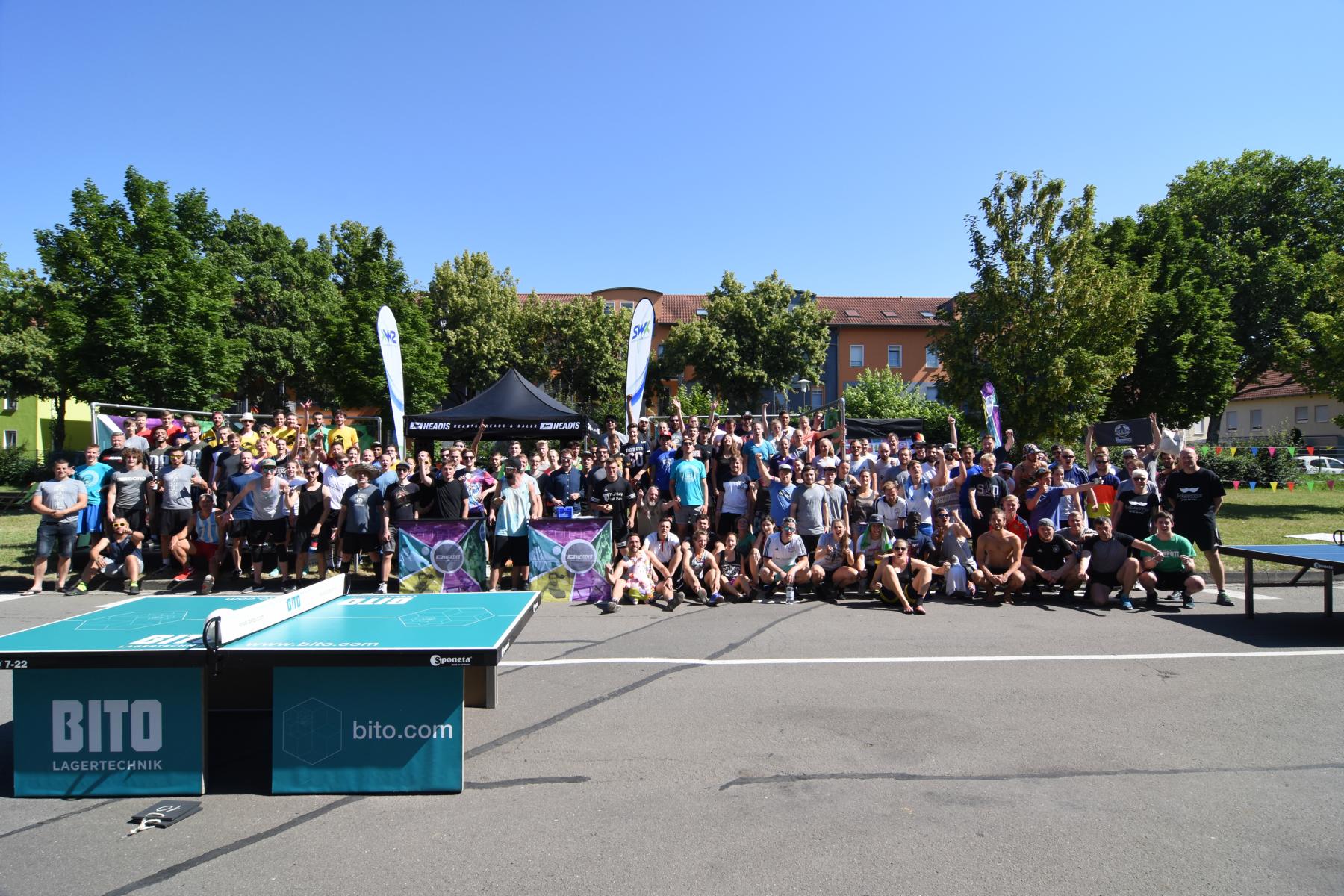 So this was it. The Headis World Championship 2018! For us it was an incredible 2 day Headis Festival together with you guys!

Bouncy Castle, Soccerparcours, Sand Castle Contest, Fotobox, 24 Table Tennis Tables, Late Night Qualification, AND AND AND! Everything you need was set at the Stadtwerke Kaiserslautern. Huge numbers of players, lots of nations – sure! The weather was great as well!

At the WC the party starts on friday already! At 4pm it all began und the players started to warmup. One of the first players was Diego Gutiereez – Argentionian, Volleyballplayer and Olympian. The atmosphere was just awesome. Everywhere there were people playing and hanging out until the very last groups started at the Late Night Qualification. The Headis WC was ready to go!

The saturday started with a giant group picture and the first of 384 games started. All in all there were 635 games played this weekend.

The best came last: Some days before the tournament we showed the Players to watch.Headsinfarkt and FuWaTe were in it, of course. Among the “honorable mentions” there were Janna Kournikova and Olaf the Wikinger. Both of them played a great WC and went their way to the final against Otto, Tatapan and Klausi respectively Headi Hoeneß, Pressure Pete and Sniper Schorsch! FuWaTe beat Headité, Cabezaza and The bid bad Head while Headsinfarkt didn’t have to fear to loose a set against Denidiik, The Comeheader and der hackfleisch headende Zerheader. In the semifinal Headsinfarkt faced Lauchgesicht. During the game it was both very quite and very loud alternating. Lauchgesicht had three match points and the serve but Headsinfarkt wouldn’t be Headsinfarkt if  he couldn’t win matches like this. Under this insane pressure he started  a 6:1 run and won the match with 13:11 in the third set!

The both Kaiserslauterer players Klausi and Sniper Schorsch won their tight 3-set-matches to become 3rd before the finals started.

The girls final looked like a two set win for FuWaTe as she had three match points. Janna Kournikova inimitably hits the edge to 10:10, wins the set by 12:10. Third set. A tigh one again! At 8:8 none of the players took too much risk and Janna Kournikova made three in a row for 11:8 and for the World Championship. Congratz to both of them!

There was one more match coming up. Olaf challenges Headsinfarkt. In the first set the underdog had ad 6:4 lead before Headsinfarkt put it up a knotch and won the set by 11:8. The second set had awesome Headis but still there was no way to defeat Headsinfarkt – 11:6. World Champion! Once again Congratz from the Headis Team.

After the final the huge tombola took place and the party began. At about 6:30 am we unplugged the last jack!

Thanks to all the helpers at the playgr0und and at the bar. It was a blast.

Thanks to all of you guys who make the tournaments what they are. No matter where. See you in Hamburg!